Returning readers will be familiar with my penchant for Sigma lenses, specifically as an adapted lens for use on m43 bodies thus addressing  focal length and aperture voids in the m43 lens ecosystem.  You can review specific applications in earlier blog entries (hit Home in the upper right corner to see the entire list of blog topics).

Currently the Sigma Corporation is experiencing its highest profile.  From establishing a partnership with Panasonic and Leica to introducing innovative and bold Art lenses that significantly outperform and price undercut OEM models, it seems that Sigma can do no wrong.

The Sigma 105 mm f/1.4 Art lens is a prime example of  the company’s clarity in reading the market.    It boasts an appropriate 105 mm aperture and an incredibly complex optical prescription of 17 elements in 12 groups (including 3 F type low dispersion elements, 2 special low dispersion elements, and 1 aspheric element).   It is both more physically intimidating and sharper (at all apertures) than either Nikon or Canon’s offerings and undercuts their pricing by 30%.

This may be the ideal wedding portrait prime lens, f/1.4 speed to address any lighting conditions and the semi telephoto focal length reach to keep the subjects natural and accentuate background bokeh.  But how does it perform on m43 bodies?

I’d like to thank Sigma Canada for generously loaning this lens since it is so new that none of my local camera rental stores have yet to stock it. 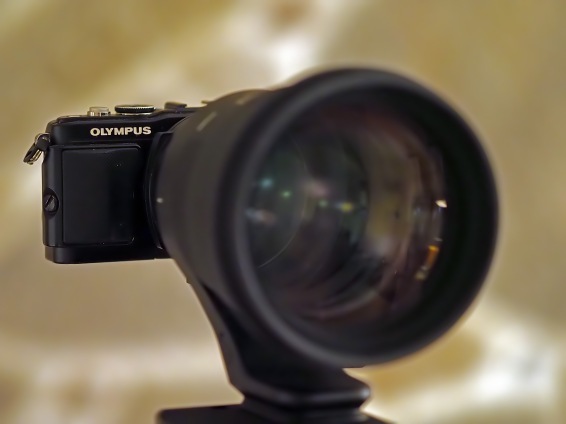 The lens overpowers the diminutive E-PL5 body.  The E-M1.2 body does not cope much better since one really needs to grasp the large tripod collar with one’s left hand to balance the system.  I prefer to swing the collar to the 9 o’clock position and hold it like a motorcycle passenger seat grab.  For sport and wildlife photography I like to shoot the Sigmas at their natural focal length.  I tend to use the 0.71x focal reducers with short primes to get that extra stop of aperture and shallower DoF, both directly address the shortcomings that the smaller m43 sensor face when compared with full frame sensor performance.

Below is an MTF comparison performed on the E-PL5 body as detailed in earlier blogs.  MTF10 curves are in red and MTF30 are in green.  With the focal reducers, the Sigma 105 mm functions as a 75mm lens which makes the Zuiko 75mm f/1.8 the natural lens to act as a benchmark. 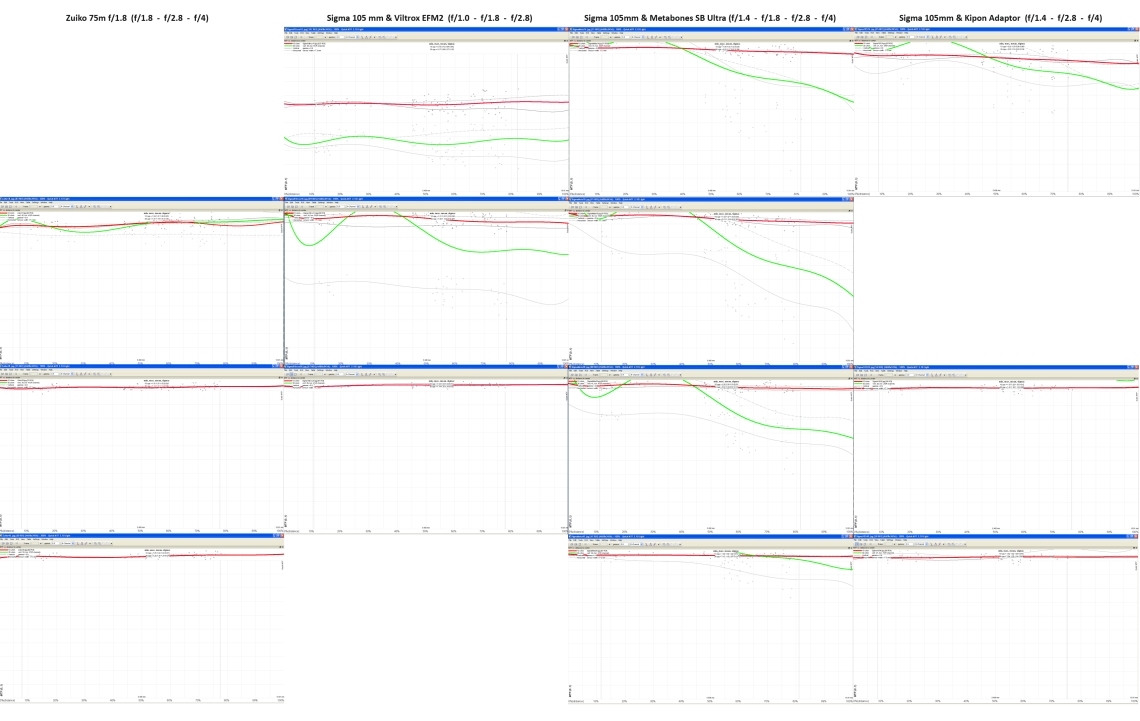 So it appears that the Speedbooster is not transmitting the correct aperture values.  f/1.4 is really f/1.0.  Similarly  f/2.8 is really f/1.8.  The shutter speed data also agrees with this equivalency.  ( I have been informed that this is not a bug but by design.  Transmitting super low f values to the camera body can result in unpredictable behavior so Metabones decided that any lens faster than f/1.4 would only transmit the original aperture values.)

5.  Without a focal reducer, the Sigma 105mm appears to be as sharp (or even sharper) as the Zuiko 75mm f/1.8 at equivalent apertures, but even wide open the Sigma is excellent.

6.  The five element Metabones Speedbooster Ultra is better wide open (f/1.0) than the four element Viltrox but from f/1.4 (f/1.8 on the Metabones) onwards they are very similar in sharpness.

7.  From f/2.8 onwards the Sigma 105mm with focal reducer is as sharp throughout the entire frame as the Zuiko, but it has an extra stop and two thirds of aperture.

The Sigma 105mm is not a fast focusing lens even on a Canon camera and that’s not surprising considering the mass of glass being moved to achieve focus.  It is certainly not as fast focusing as the Zuiko 75mm when mounted on a m43 body.  With both lenses manually adjusted to minimum focus distance, the AF was triggered to the same near infinity target.  The Zuiko lens took 0.6 seconds to achieve focus while the Sigma took 1.5 seconds.

Vignetting does not appear to be an issue.  The use of a focal reducer does seem to marginally increase the amount of vignetting but the Sigma at 75mm focal length exhibits very similar vignetting as the Zuiko 75mm when both are wide open.

So how does the adapted Sigma shoot on the E-M1.2 in real life?

My wife and I are novice ballroom dancers and we attended an annual social evening and competition last night.  I brought the Sigma and the Zuiko 75mm f/1.8 with me as well.  I must say that wearing the E-M1.2/Sigma on a sling with formal wear to an elegant banquet is like bringing a Desert Eagle to a knife fight.

After requisite cocktails and dinner, it was time for the competition!   The dance floor was generally nightclub dark with the occasional spotlight making exposure metering difficult and focus lock occasionally lag.  I shot at ISO3200 to ensure aperture speed would be high enough to freeze most of the dancers’ movements and noise was negligible and easily removed in post.

At f/1.0 your DoF is beautifully shallow for this latin dancing couple.  On the left, the man is in sharp focus but not his partner.   On the right –  the focus is reversed.

In conclusion, the Sigma 105mm f/1.4 is as sharp in the center wide open at f/1.0 with the Metabones Speedbooster Ultra  as the Zuiko 75 mm f/1.8 but produces a superior background bokeh.  The shallow DoF can be challenging to work with when shooting couples who also happen to be moving rapidly through space but also gives the subjects a lifelike three dimensional effect and isolates them from a busy scene.   If I didn’t have to save for the  upcoming E-M1.X body, I might consider keeping this lens!

Check out this link from Lens Rental Blog:

The 105mm performs better than either offerings from Nikon or Zeiss!