Some people were interested in how well the AF worked with the Metabones Speed Booster and so I thought I try to evaluate that as scientifically as possible.

To measure the speed of acquiring focus, I placed a microphone onto the body of the camera being tested and I recorded an audio track with Audacity.  The recorded file clearly shows when the shutter release was pressed and when the shutter tripped after focus was attained in S-AF mode and the time track of the recording made it possible to determine the time to focus.

Only the Speed Booster S was used since it is assumed that both the Speed Booster Ultra and the Speed Booster S will perform the same since they both use the same firmware (v2.6).  The first lens used was the Canon 200mm f2.8 L and it was manually turned to the position of closest focus.  The target was a red wooden fence at the back of my yard about 60 feet away.  The smallest focus spot was chosen and placed in the middle of one of the vertical fence pickets.  An E-PL5, an E-M1, an E-M1(II) and a Canon T6i were used.

A second telephoto lens was used to see how a native lens would perform.  A 43rd Zuiko 50-200 SWD lens was used at approximately the same focal length (150 mm) as the Canon lens with the Speed Booster S and its start position was also at its shortest focus position.  Of course only the E-PL5, E-M1, and E-M1(II) could be tested.

The results were not as expected.

The Y axis scale is denoted in seconds.

There’s no point in comparing the Zuiko lens to the Canon since lens focusing speed could be due to design and construction differences.  But it is interesting to see that here we obtain expected results, the E-PL5 lacking phase detect focus points focused the slowest and both E-M1s were exactly the same.

So what can we conclude?  The Metabones Speed Booster offers good AF performance with Canon EOS lenses, just never as good as on a Canon body.  Which is what one would expect.

To make it more useful, I retested the Canon 200mm lens with the Kipon AF adaptor that has no optics but does give AF and aperture control and conveys EXIF data.   The only difference in the test is that I triggered the shutter release with a remote so as not to disturb the camera body and keep the focus point on the exact same featureless spot on the wooden fence picket for all three cameras. 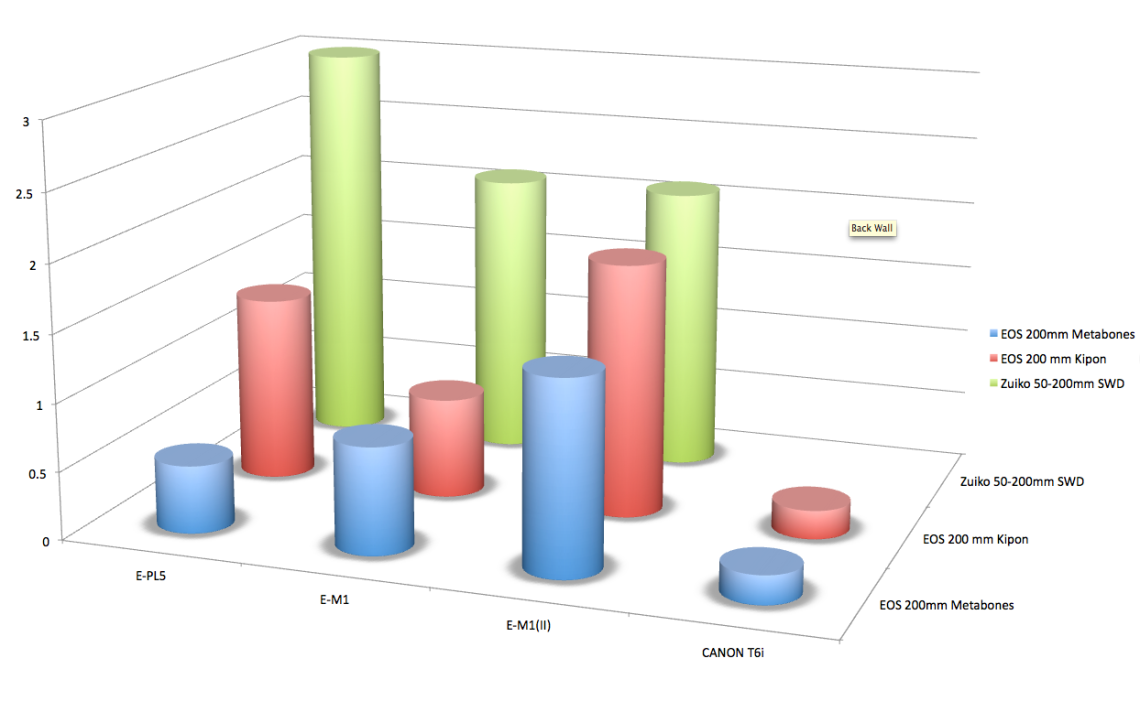 The Kipon adaptor results are more in line with expectations.  The E-PL5 takes nearly twice as long to focus as the E-M1.  But something is going on with the E-M1(II).  It never achieved real focus although the camera thought it did.  Even after multiple shutter releases.  It took increasing the size of the focus spot to include the edges of multiple fence pickets that focus could ever be achieved, and then it still took two shutter releases to get there.  The first release got the lens close to focus, the second finally got it true focus, hence the very long time result.  Clearly the Kipon Firmware is not up to dealing with all the new  121 phase detection focus points of the E-M1(II) and likely the same goes for the Metabones adaptor.

I haven’t seen a firmware update from Kipon for over a year but Metabones has a good history of continuous support.  For that reason I would choose Metabones over Kipon for smart adaptors and focal reducers.