As an amateur astrophotographer, one of the greatest celestial phenomena to capture is the transit of the International Space Station across the face of either the Moon or the Sun.   As it crosses either of these bodies, it can form a very sharp silhouette (since  it will be grossly underexposed against a much brighter background) that can reveal incredible detail.  But it’s not as difficult as one might suppose.  You do have to be in the right spot on Earth at the right time as the transit lasts only a couple of seconds but websites like Calsky.com can inform you a week in advance when such an opportunity within driving distance to your home location will occur. 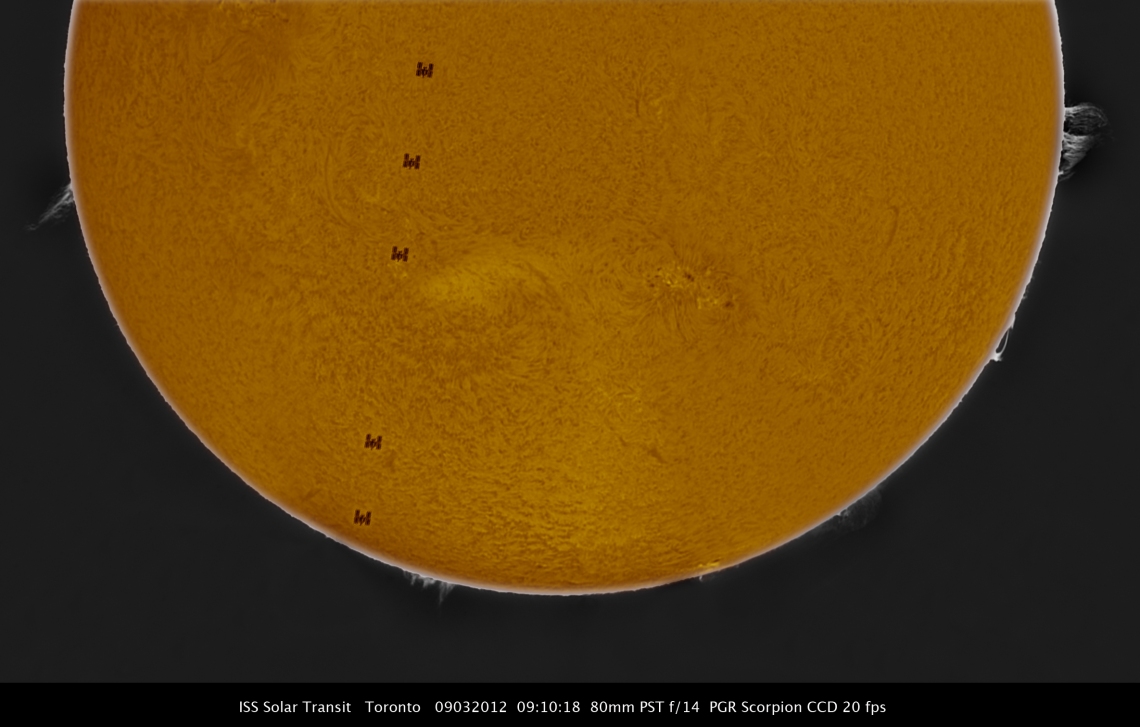 You can clearly make out the individual modules and solar panels in this 2012 solar transit. 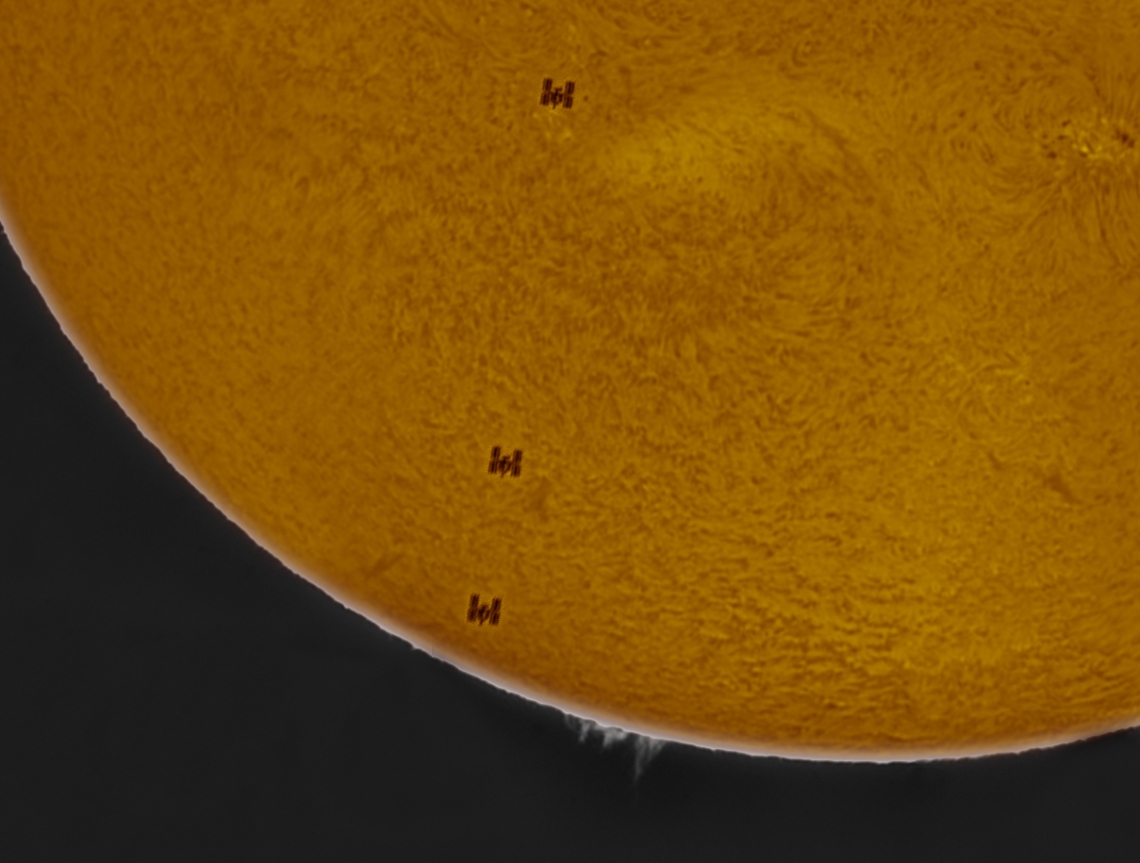 Photographing the sun requires using either a mylar solar filter which is able to reduce the intensity of solar light by a factor of 1000 and will allow you to resolve sunspots.

But not the true granular nature of the solar surface, complete with writhing projections of plasma that occasionally detach and shoot off into space.  If these CMEs (coronal mass ejections) hit the Earth we are treated to a display of the Aurora Borealis.  The last big one hit us in 1859 and disrupted telegraph transmissions and compasses.  If it had hit us today we would experience global electronics failure.

To visualize this type of detail requires a dedicated solar telescope with a special filtering system that transmits light at the specific wavelength of 656.28 nm (known as Hydrogen alpha or Ha) and with an extremely narrow bandwidth of 0.05 nm.  The wavelength corresponds to the light released when the lone electron of a hydrogen atom (the main constituent of all young stars) falls from a quantum level of 3 to 2.

I’ve imaged a number of solar and lunar ISS transits in the past so the novelty has started to wear thin until I received a notification from CalSky.com about a rare dual ISS transit of both the rising Sun and setting Moon, in the same morning, visible from within Toronto and on a Sunday morning!  I only had to drive about 5km to get onto the centerline  and since I  like to travel light, I  took only one scope – my dual stacked 40mm Coronado Solarscope.

I recorded the video of the solar transit at 8:20 with my planetary imaging camera, a Point Grey Research Grasshopper made in Vancouver, B.C.    I had intended to image the Moon in hydrogen alpha (Ha) but of course the bandpass with even one Ha etalon is far narrower than that found with narrowband Ha filters.   And the Coronado diagonal has a built in blocking filter that is also extremely restrictive so no image was possible at all.

Without time to go home, I ransacked my car for anything that I could use to modify the Solarscope into a visible light scope, and not squander this opportunity.  In the First Aid kit I found some very sticky wound closure strips that could double as duct tape. The lens objective of the Solarscope is screwed into the back of the first etalon.  I removed the lens objective and wrapped several sticky strips around it so that I could jam it back into the OTA into a position several centimeters anterior to its normal one.  This moved the focal point forward enough to just attain focus with the ccd without a diagonal in the optical train.  I taped on a red B&W filter to sharpen the image since the Moon would be under 5 degrees of elevation.

At 9:51, I captured the video of the lunar transit .  And also one of an unknown and very bright satellite.    I stacked about a hundred images of the Sun and Moon in order to sharpen the details and overlaid the ISS transit positions with PhotoShop.  This may be the very first time that anyone has captured a dual ISS transit.

You can click on the above image to view it in original resolution.

P.S.  The reason why both the sun and ISS are not particularly sharp (as compared to 2012) is because both the Sun and the Moon were very low in the sky, where the atmosphere is thickest and ground pollution/haze has an impact on resolution.  Remember the Sun was just rising and the Moon just setting.