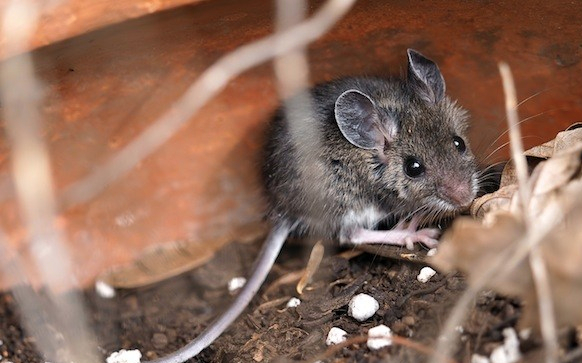 I’m not a true artist because I draw terribly and likely paint even worse.  But I discovered that being a prolific user of Photoshop gave me some skills that allowed me to digitally paint certain styles of artwork, in my case motorsports.  Photoshop gives the user a powerful array of tools that immediately compensates for innate weaknesses in one’s ability to draw what one sees accurately.   And then it unleashes the power of digital manipulation.  I can change colors at will, erase and correct, layer and filter.

Everyone paints subjects that have emotional appeal to them.  I chose motorsports because I’ve been interested since a child and as a adult have come to appreciate the human story behind every great victory.   Or loss.  And it’s another avenue for my over active brain to focus on and to satiate that urge to produce something.  In the past, the struggling artist struggled in isolation.  One would hope that digital integration of the world gives a new chance for artists to share their work and perhaps gain some consolable degree of recognition.

This is my first piece.  Long time readers of this blog will know I have a penchant for Mazda rotary powered vehicles and their professional motorsports victories.  A sports car is not a real sports car unless its proven its mettle on the track.  And the Mazda Rx7s of the early 1980s dominated their class and often punched well above their weight.

My next pieces were involved in my attempt to convince Blipshift to market one of my designs on their T-shirts.  Since I’m also a motorcyclist and I noticed a paucity of motorcycle themes in their wares, I did some research to find a subject that would strongly resonate with me.  And I found the ideal one.

This is famed German racer Helmut Dahne aboard the handbuilt Honda homologation model VFR750R, commonly known as the RC30.  Dahne set the Nurburgring circuit record aboard the RC30 at 7:49:71 in 1993.   That record will never be broken because after a spate of fatalties in 1994, the track cancelled all future motorcycle contests.    How fast was Dahne?  The current record is a minute faster with a Lamborghini Aventador SVJ that has 770 bhp, 4 wheels and all wheel drive.   The RC30 only has 112 bhp and exquisite balance and handling and can rev to 14,000 rpm.   I know, I used to own one. 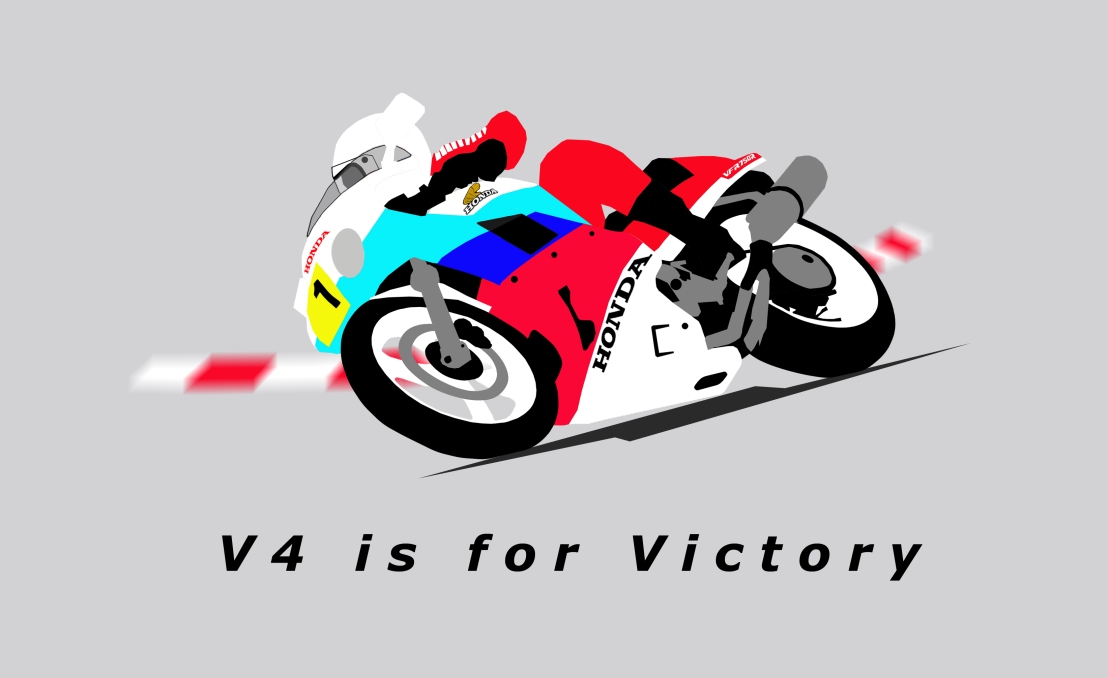 One of Dahne’s earlier victories was winning the 1976 Production TT on the Isle of Man aboard a BMW R90S.  The Isle of Man is likely the most fearsome road course in the world, running through sea level towns with narrow roads lined with stone walls and then up to the mountains and back down, it claims lives every year.  And I still own a 1968 BMW R60/2 US and on early Sunday mornings on empty streets I have my Walter Mitty moments riding it.

I was leafing through a magazine and came across an ad for a business that sells vintage racing posters.  Loving the style of them, in an era when these posters were produced just for mass marketing purposes and then destroyed, they nevertheless exemplify a lost world of technique and talent.

Mazda is a tiny car manufacturer in a world of behemoths created through a gradual consolidation of company mergers.   To pull off the 1991 feat on their budget and limited resources is almost beyond belief.  And with a non piston engine whose development only began in the 1960s.   And based in the Japanese city of Hiroshima where the company had to rebuild from nuclear devastation …. again the indomitable human spirit rises.

The next one is the result of pent up nervous energy in a winter devoid of photographic targets.   Thunderball is my favourite vintage James Bond movie.  Here we have beautiful Italian actress Luciana Paluzzi riding a rocket grenade equipped BSA A65 Lightning Clubmans about to tangle with Bond in his Aston Martin DB5.   Bond has deployed the twin Browning machine guns hidden in his driving lights in anticipation of some action.

Next to the Rocket Goldstar model, this BSA is my favourite.

I was inspired by the motorsports art of Tim Layzell, I tried my hand at capturing a moment in autosport history in (my interpretation of) his style.  This is the 1983 24 Hours at Daytona.  Legendary driver AJ Foyt fought through the torrential early Sunday afternoon rain to gain a 4 lap lead over the next GTP class car in his Porsche 935L. Meanwhile the tiny 1.3L Racing Beat Mazda Rx7 rose through the ranks as attrition claimed 50 of the 79 competitors to win its GTO class as well as placing 3rd overall – the highest finish by Mazda at Daytona. The race was briefly halted after visibility fell to zero, and when they returned for a final hour of racing, the Rx7 lead the Porsche 935L for a single lap until the Mazda was put back into its place! Years later, AJ Foyt recounts that amongst all his many, many wins (4 Indy 500s and the great 1967 LeMans) this one was his favourite. His dying father persuaded him to race in Daytona and as such desperately wanted to win.

The hilarious thing is that Foyt was not supposed to drive in the Porsche 935L at all, his ride was an Aston Martin which retired early. But the owner of Swap Shop who owned the 935L wanted Foyt’s celebrity to promote his business. French driver Bob Wollek was incensed when he learned Foyt would take the car out in the rain knowing that Foyt had never driven it or even knew the shift pattern but Foyt was a genius and gave the team an additional 4 lap lead and set the fastest rain lap.

In addition, the Andial 935L was the most successful of the Porsches inspired by the original 1978 “Moby Dick” 935/78.  Its radical aerodynamic and lowered bodywork along with a first time water cooled 3.2L flat 6 turbo good for 850 bhp allowed it to run almost as fast as the Group 6 Prototypes fielded by Porsche and Renault in the 1978 Le Mans.   Moby did 227 mph on the Mulsanne Straight – for a production based car!

And finally I sold some motorsports photos and used the funds towards the purchase of a vintage 1969 Omega Chronostop Driver watch.  This watch was designed to be worn by race car drivers on the underside of the wrist so that the watch face can be easily read while holding the steering wheel.   The watch is the focus of this piece with the interior of my 1985 Rx7 completely in monochrome except for objects that have dials.  The remainder of the story has me chasing my friend’s Porsche GT3 RS which is a complete fantasy even if I could boost 2 bar … which I can’t.

I drew this to commemorate the 50th anniversary of the seminal 1969 movie The Italian Job which opens with a beautiful scene of an orange Lamborghini Miura being driven with aplomb around the Italian Alps and Matt Munro singing the theme song On Days Like These.  The 50th anniversary was made even more significant by the location of the actual car that had been used in the movie and its full factory restoration.   You will notice that I have substituted my own car for the Lamborghini and for good reason.  The Miura sparked off the supercar revolution by placing its V12 engine in the rear and wrapped it with an evocative and stunning body.   But it was a difficult car to drive, horrible to drive fast.  With only a gas tank in the front as ballast, steering was difficult when it ran dry which given the poor economy of a V12 from the mid 1960s would be very frequently.   The cabin was cramped with all the weirdly unergonomic Italian placement of controls, visibility out the back window nonexistent, and reliability even when brand new questionable.   It took the Japanese to introduce design and quality build to car making that forced Europeans and Americans to improve their game so that we all enjoy cars today that are problem free and easy to drive.  That’s why the car that followed the Miura only a decade later is more deserving to drive that opening scene.  Light weight and agile with perfect weight balance and an engine soundtrack nearly as stirring as a V12 and a joy to spend time in the cabin and drive – the first generation Rx7 is a worthy stand in for The Italian Job.

BlipShift didn’t exactly accept my reinterpretation of “The Italian Job” but liked my Rx7 Fb design enough for me to modify it to their tastes.

Please press [HOME] in the upper right corner for other topics in this blog.