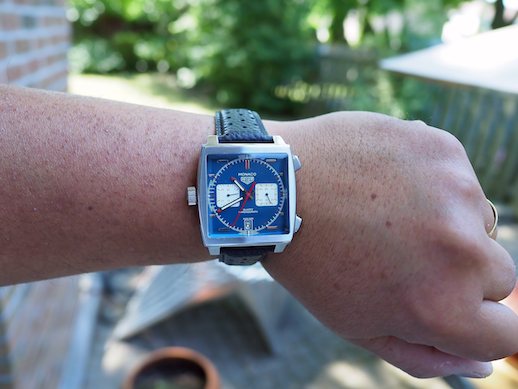 Some of you may task me for continuing to buy products made in China after I declared in an earlier entry that we should all boycott such products, if possible.   I still firmly stand behind that position as the relationship between China and the free world continues to disintegrate.  China has formally charged the two Canadian hostages it harshly imprisoned 18 months ago with spying, in response to the legal detainment of Huawei executive Meng Wanzhou.  China has reneged on the 1997 Sino Anglo Treaty that ensured civil liberties for Hong Kong citizens until 2047 by unilaterally imposing a security law that makes even simple public demonstrations a crime.  The wording is so imprecise that anything can become a crime when it suits the government of China.   And in a move ridden with unexpected hilarity, China warned its citizens not to travel to Canada because of the danger of violence from Canada’s police forces.

But I bought this watch ($200 USD shipped), in late February and because of enormous delays imposed by the current pandemic, I just received it.  Chinese replica watches are improving steadily to the point that the most expensive copies are so convincing that even watch technicians have a hard time telling them apart from the real thing even when working on their internals.   But at this price point, this one is fairly easy to spot but is impressive all the same.

It all started in the 1960s when there was an intense competition to construct the first automatic (self winding) chronograph watch (a watch that has multiple subdials that collectively perform as a stopwatch).  Jack Heuer beat both rivals Zenith and Seiko to register a patent for such a movement and gave the new Heuer Monaco a bold design to commemorate the feat in 1969.  In that era, watch makers subcontracted out the actual watch case to third party factories.  One of these companies, Piquerez, had just perfected the first waterproof square shaped watch case and Heuer moved the crown to the left side to remind the wearer that it was indeed an automatic movement.  The watch got an additional boost by being worn by actor Steve McQueen in his seminal racing film, Le Mans, in 1971 with more than 15 minutes of visible screen time.¹  However the watch only remained in production until 1975 with a debut price of only $200 USD.   Time has made both the watch and the Le Mans film increasingly more appreciated and revered.  It took the marketing finesse of the TAG Group after acquiring Heuer in 1985 followed by the Louis Vuitton Möet Hennessy (LVMH) takeover in 1999 to exploit this special heritage and the familiar flat petroleum blue dial face with the white subdials resurfaced as the first of the McQueen Monaco reissues in 2003.

This Chinese Replica follows the more popular form which is more faithful to the original 1969 1133B Monaco by keeping the horizontal hour markers instead of  having them arranged radially and labeling the manufacturer as simply Heuer instead of TAG Heuer.   The first of these types appeared in 2009 as a limited edition 40th Anniversary model (CAW211A).    This type is also a current model with the designation CAW211P whose only outward difference appears to be a transparent back showing the Calibre 11 movement whereas the 40th Anniversary Limited Edition was a solid back bearing Jack Heuer’s signature.

As you can see, the Chinese Replica is very convincing at first glance.  Especially the watch face.

The face and subdials look spot on.  As do the subdial hands.  But the hour and minute hands lack the terminus red stripe.  And instead of Automatic Chronograph, it reads Quartz Chronograph.   At least the replica is truthful because for the price it must be running a quartz movement instead of a mechanical movement.   The lumes on the replica do glow in the dark.

The replica crown does not bear the engraved Heuer but looks identical to the crown in the 2003 CW2113 model.  It also doesn’t do anything, it’s a dummy screwed to the side of the watch case.  The real crown is countersunk and recessed on the right side.  The engraving is clearly wrong on the deployant clasp and the replica back also has the same form as found on the CW2113 but missing the all important TAG Heuer serial number.

The replica has convincing heft, the perforated and thickly padded leather strap is also well done but the watch fails in the functionality test.   The sweeping second subdial on the right is a dud.  It does move but only in relation to the hour hand and thus tells no useful information.  The 30 minute totalizer subdial on the left does work, as does the chronograph’s red second hand with no flyback …. like the real thing!

What the replica does demonstrate is that obviously China manufactures components of the case, clasp and perhaps band.  When a watch is declared Swiss Made, only 60% of its fabrication costs have to be actually borne in Switzerland and it needs to be assembled there.  It also needs a Swiss made movement which in turn is defined as a movement assembled and inspected in Switzerland and again with 60% of is manufacturing costs being domestic.  Which leaves a lot of room for cheap (in terms of manufacture not quality) Chinese made components … of all sorts.

Which makes boycotting Chinese products so difficult.  But I intend to try whenever possible.

¹ McQueen and race car driver Jo Siffert bonded during production because of their similar humble backgrounds.   He adopted the same race overalls that Siffert wore and in those days race car drivers did not make the money they do today so Siffert had side hustles selling Porsches and representing Heuer watches at the racetrack.   The Monaco was actually not selling well so when the propmaster requested that Heuer provide three identical watches for use in the movie, the Monaco model was the only one that they had so many examples readily available.  The rest is history.