Driver Jim (no relation) was cursing the weather, the rock hard summer tires on his Tundra Buggy and its frozen, useless wiper blades.   The blowing snow had created conditions of zero visibility so it was a moot point that he couldn’t see out his snow streaked windshield.   With both differentials locked, the vehicle surged up the slight incline and the cabin rocked ferociously to the left as loose items and dozing passengers were suddenly flung across the center aisle accompanied by the sounds of alarmed surprise.

Fortunately, this was not how my trip began.

Churchill, Manitoba is a small community on the edge of the western shore of Hudson’s Bay.   It also happens to be the most accessible location on the planet to view polar bears in their natural environment, Canada’s own version of Kenya and Botswana.  And with considerable shame – something I only recently learned despite living my entirety in Canada.

Clearly, the rest of the world knows.  Our group had an Aussie, a German, a couple from Singapore and a large number of Americans including a family represented by three generations.  Only four of us were Canadians.  And they were all willing to meet up in Winnipeg at the onset of winter and fly another 2 hours North, at considerable financial expense for a four day stay.

Cape Churchill is a north facing shelf extending 50 km into Hudson’s Bay.  A number of factors combine to make ice form first at this specific location year after year attracting the population of about a thousand polar bears to migrate through Churchill on their journey across the frozen Hudson’s Bay to their winter hunting grounds for ringed seal.   These being the prevailing NW winds, the counterclockwise current of the Hudson’s Bay sweeping loose ice directly onto Cape Churchill, and the draining of vast quantities of fresh water from the Churchill, Nelson and Seal rivers which freeze at significantly higher temperatures than the sea water of Hudson’s Bay.

Polar bears do occasionally make their way into the center of Churchill despite the town eliminating all traces of food wastes.  Inhabitants are taught to approach building and street corners slowly and since there are no roads outside of town, all car doors are left unlocked to allow a quick and easy sanctuary.   Bears are typically driven away with noise making cracker shells fired from shotguns and repeat offenders jailed for a month (with no food) before physical relocation.  Not only are these dangers avoided by staying at the Tundra Buggy Lodge, there is easily an hour saved by not having to travel from the town to Cape Churchill.

The next morning we set off for our first full eight hour day with our Tundra Buggy carefully following old military trails through the conservation area to avoid damaging the environment.

The biology of female polar bears is fascinating and unrivaled.   Mating typically occurs on the ice in May and the act of intercourse actually stimulates ovulation.   The embryo remains unimplanted for four months until it is determined that the female weighs at least 300 kg and has 200 kg of fat reserves, otherwise the pregnancy is absorbed.  Delayed implantation is common in carnivores and present in all bear species.  It allows breeding in Spring when the ice is stable and finding a mate is easier and the emergence of pups nearly a year later to coincide with the birthing of seal pups.  The female builds an underground den and gives birth in December to one or two 0.5 kg babies and begins nursing them for the next 2 years!  That’s why near the end before a Mother bids good bye forever to her cubs, a nursing male cub can actually be larger than his Mother.

During these initial months, the mother doesn’t eat or drink anything and is able to reabsorb the nitrogen waste products of her idling metabolism so doesn’t need to urinate.  This allows her to conserve water and prevent muscle atrophy and somehow also reduces bone loss.  She exists in a state known as walking hibernation with her heart rate dropping from 70 bpm to 8 bpm and the baby rapidly gains weight from the high fat content milk, emerging from the den in March 10-14 kg in size.  At this point the mother had undergone incredible weight loss and is eager to resume hunting with her pups in tow. 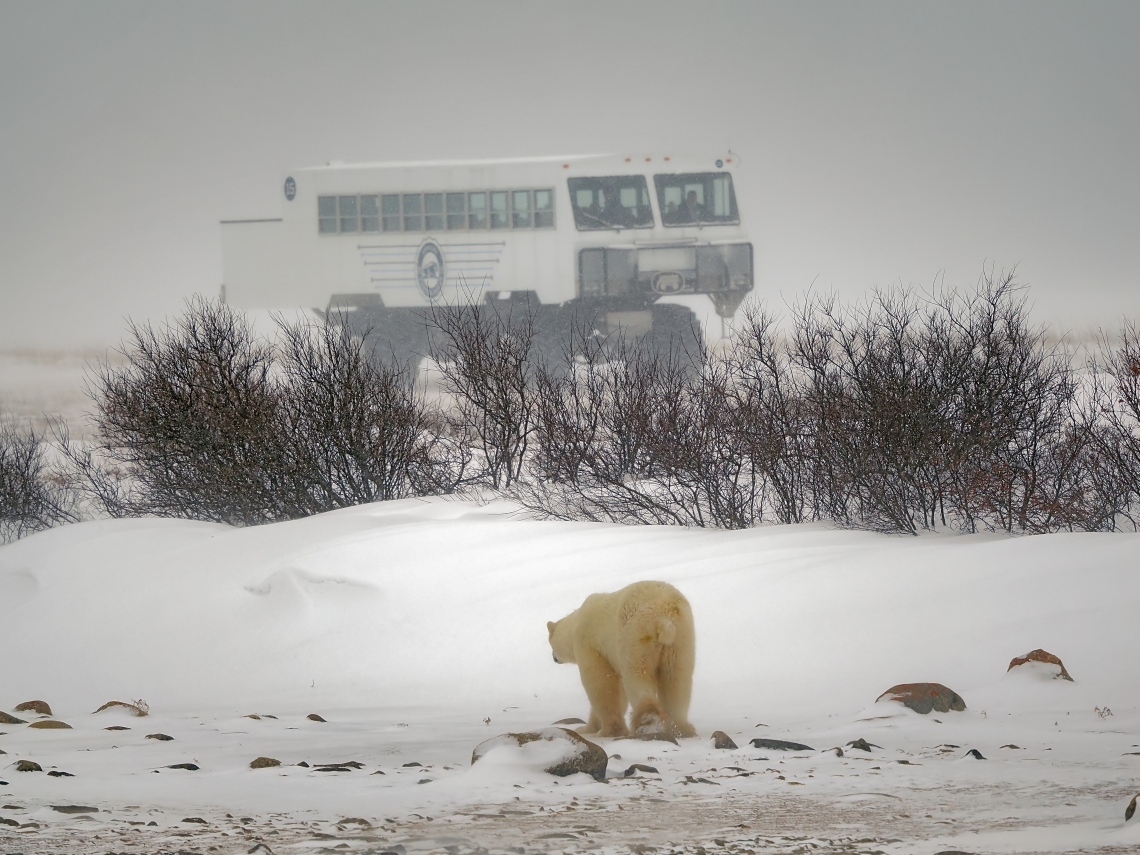 With whiteout conditions all Friday, we decided to cut our time short in the Tundra Buggy and fly back to Winnipeg before all the flights out of Churchill became grounded.  It was a glorious experience showing the attention to detail that comes from a highly refined business.  Every meal we enjoyed was Toronto restaurant quality, sophisticated and delicious.   We lived in great comfort in one of the most remote and harshest areas of the planet.   Our drivers had decades of experience and were true wildlife experts with a deep understanding of polar bear behavior and how to find them.   Many return to Jasper, Alberta to operate Snow Cats on the ski slopes for the remainder of the winter.

While there are many tour operators, Frontiers North is a wholly Canadian venture and the original.   Others will not have access to prime polar bear areas that they do.  Others may not spend 8 hours in the field, preferring to give you tours of the town.   And still others will not have Tundra Buggies, but use conventional vans with armed guards to protect their clients when they emerge to view the bears.  They advertise that their clients are able to photograph bears at ground level giving them a more authentic appearance than those taken from an elevated platform.  This is of course specious.  I defy anybody looking at telephoto shots to discern that they were taken at a slight elevation.

Once again, I was the lone Olympus photographer.  Which has the advantage of nobody knowing the painfully expensive cost of the Zuiko 150-400mm f4.5 Pro telephoto lens.   One Canon pro photographer on the trip brought his L Series 600mm f/4 .  Impressively big but those have been around for so long that used ones on eBay are easy to find and easy on the wallet.  I was able to carry all my camera gear in one average sized knapsack, no specialized camera bag, no hard shelled foam lined Pelican cases.  Just an unassuming knapsack.   The successful wildlife photographer is the covert photographer.