The premier world professional tennis tournament in Canada, the Rogers Cup, has come and gone again for another year.  It was a historic moment in Canadian history since for the first time in 50 years, a young Canadian woman won the women’s event.  Not that this made the mainstream news outside of Canada.  Even the fact that Serena Williams, who faced Canadian teenager Bianca Andreescu in the final match, played only 20 minutes and retired due to a persistent back injury was not enough to deserve a mention in the Washington Post.  That’s the reality of having a giant as your neighbour, the Finns probably feel the same way.

But this is about shooting the tournament professionally with my Olympus E-M1X for the a Canadian tennis website.  I was able to attend four significant matches despite my day work schedule.  Last summer I also wrote about my experiences at Rogers Cup but this year I was quickly granted full media credentials for two reasons.  I was representing an English speaking media outlet and the tournament alternates the Men’s and Women’s event between Toronto and Montreal so this year the women played exclusively in Toronto.  For whatever reasons, the women’s event attracts less attention (and prestige?) which is also the reason Rogers Cup give for the continued inequity in the prize purse between men and women’s tennis in Canada.   Rafael Nadal went home with over $1 million USD while Bianca received a little over $520 thousand USD.   Less attention means less media coverage and more opportunity for underdogs like myself to be accredited.

Sony was again the only manufacturer present with PRO camera support with camera and lens evaluation loans so I saw quite a few Alpha bodies amongst the Nikons and Canons in the field.  The new Sony 400mm f/2.8 is beautiful and a favourite but needs a monopod for support.  I was able to shoot the same FOV with the 40-150mm f/2.8 with the MC14 at f/4 at 210mm but of course the background bokeh will be better at isolating the subject with the full frame camera bodies.  But how much is enough bokeh?   I think my workaround solution with m43 produced effective images.

I shot primarily in aperture priority mode, ISO64 and wide open, S-AF at 15 fps with the 9 central AF focus point pattern.   I wanted maximum background blurring and slowest shutter speed to emphasize the motion and dynamism in the players.  It was particularly helpful that some of the matches were held in the evening since the stadium lighting gave me the freedom to control shutter speed with higher ISO settings.

The two preceeding images are meant to highlight the background differences between aperture.   The top was taken with the Zuiko 40-150 Pro at f/4 210mm with MC14, the lower with Sigma 120-300mm f/2.8 with Metabones 0.71x Speedbooster Ultra at f/2.0 212mm.   There is better subject isolation in the lower image and background blurring with two extra stops of aperture open.  Even the head of the racquet gives the illusion of protruding out of the image.  The lower shutter speed also renders wonderful tennis ball and racquet motion blur to demonstrate the dynamics of the game in the upper image.  Often we see tennis images with tennis balls as frozen eggs in midair.  I suppose that connotes ball motion but that technically is an easy shot in this age of digital photography.

Capturing player’s emotion is another facet of tennis photography.  Knowing when to expect emotion, like at the end of deuce situation or the end of a set or match are prime occasions.

If you obtain a particularly photogenic action sequence, it can be used to construct a composite image highlighting the complicated movements of a tennis swing.  By photogenic I mean that some players contort and grimace their faces during play and I try to cull those images since we’re trying to show people in their best light.  Images that have limbs or racquets concealing the face also have to go.

There are only about 20 spots for photographers to occupy in the trench that runs along the length of the court.  I was able to successfully obtain a pass to this special area for every match except the final match.  This is when the big media outlets typically send a photographer even when they’ve shown no interest to appear during the earlier rest of the week when play has been going on.  Even though my website is dedicated to conveying all sorts of tennis news to true fans, it only has about 11k FB fans and 30k Twitter followers and cannot compete with the circulation of the largest daily newspaper in Canada, the Toronto Star.  The organizers of Rogers Cup have no compunction in displacing me in favour of The Star photographer even though The Star cares and knows nothing about tennis.  Fair enough.  They were kind enough to suggest checking in after the first set was over for any reserved spots that no showed and when I entered the stadium I observed there were indeed two spots that remained unoccupied that had been reserved by other big media outlets who in the end could not even be bothered to send somebody to cover a particularly historic (for Canadians) final match.  I was prepared to shoot from the Concourse Level at the highest general seating row with my Sigma 500mm f/4 prime as shown below.

And these are the shots you often see in newspapers and magazines.  Not bad.  But not especially creative either.  Speaking of which is the photo used by The Star.  The champion with the trophy shot.  That anybody with a cell phone could take. 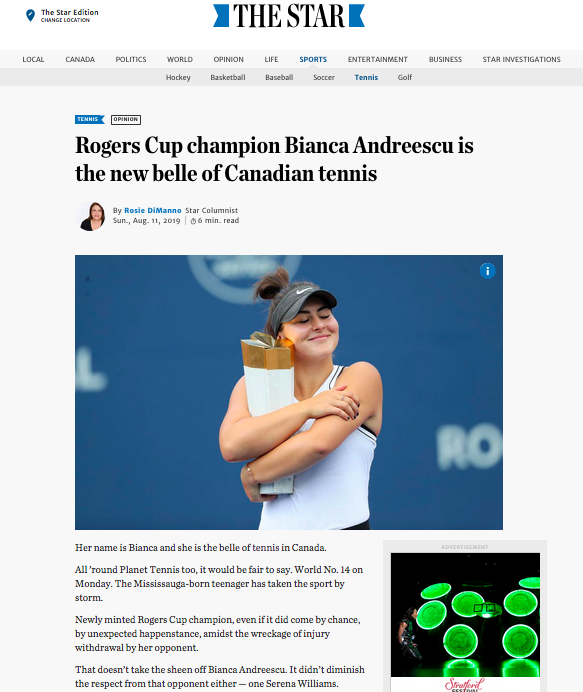 So this is the real reason for the pay inequity between the Men and Women at Rogers Cup.

In short, the Men’s Tournament is a Masters 1000 level tournament, just below the 4 Grand Slam titles.  The Women’s Tournament is a Masters 900, two tiers below the Grand Slam so less prize money.  The sports world had long ago decided to pay men and women the same for equivalent levels of tournament play.  But the organizers could decide on their own to impose pay equity, there is no rule against that.

I’m happy to report that TIME magazine did mention the historic win by Bianca Andreescu after a quote from Serena Williams.

I predicted it in May.  Now today, Bianca Andresscu has won the US Open by defeating Serena Williams in a convincing two set match.  And I count three articles in the Washington Post!

Shortly after the match, this article appeared on the Toronto Star website:

Clearly the Toronto Star knows nothing and cares nothing about tennis.  But it is also unforgivable that a newspaper of its stature and history would make such a mistake.